When you came back from Japan and reported what you learned to your superiors and colleagues, they must have praised you.

However, have you ever got stuck when you tried to put it into practice?

You might have been disappointed by being told, “It won’t work because our country is different from Japan” or “What is the point of working so hard?”

Government officers— in some cases, don’t have great salary, and are in occupations which only pride in the country and motivation make them keep on going.

However, in Osaka Prefecture, there is a local government officer who has established innovative measures one after another and has led those measures to success with his high spirit and vitality.

Here, we are going to introduce how he created such measures and how he felt while he was tackling those tasks as a local government officer. 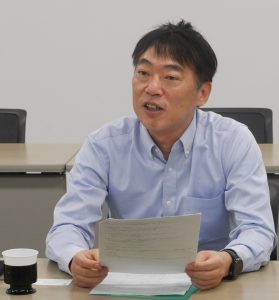 Created mind maps in which tasks, issues and measures were organized with the results of the interviews with 100 small and medium-sized enterprises by his team.

Opened MOBIO, a hub to support small and medium sized manufacturers in 2010.

At MOBIO, implemented MOBIO-café which serves as a place to display products of the supported companies and to vitalize cross-interaction between companies.

A.   (Makoto RYOKE)
A long time ago, hard workers in Japanese administrative organizations did not used to be highly appreciated.

In particular, in work places where every worker does the same job such as granting permits, if someone worked hard,
other workers needed to work hard, too, so he was not valued, as it was thought to cause a depreciation of the work environment.

When it was suggested to purchase a PC, objections arose, saying that it would lead to redundancy.

Currently, in the Osaka Prefecture central government office, job tasks involved with granting permits have been reduced and modernized with IT.

Redundancies have been made, and currently each person can do multiple different tasks skillfully.

Therefore, even if one worker shows outstanding ability, he will not be disliked as much as before.

I think that someone who works hard and produces good results is now appreciated, as the current target is to produce good results with a small number of staff.

Q.
When starting new things, there are always some people who object to them, as they don’t like changes, and there are some who don’t take any action.  How do you manage to involve those people to realize projects?

I try to listen to constructive adverse opinions, whereas some people always object whatever I say.

It is better if I understand the reasons why that person objects, but it is out of the questions to persuade someone who is determined that it is impossible because a new project increases their workload or they don’t like me. Therefore, I cannot help but ignore them.

First, I find allies and do whatever we can.
I then try to persuade those people with the results.
By repeating this procedure, I convince them at least not to object.

On the other hand, I cannot omit to persuade superiors who have approving authority.

Fortunately my superiors were nice and most of them allowed me to go ahead. I think we trusted each other.

I used to make an effort to have good relations with my superiors.

I am not good at establishing relations by buttering up or joining factions, so I don’t do such things, but I tried to be a useful staff member when they were in trouble.

Communication is important, and it is vital to care about what your superior wants and what his / her task is as a superior.

When I was younger, one of my superiors told me to imagine what my two-level-up superiors think. This is the key point.

Also, good relations with your superiors is vital for your staff because if I and my superior were not on good terms, and the superior objected to what I do, as he / she did not like me, then it would mean my team and staff would have a low evaluation.

What do you think about Mr. Ryoke’s opinion?

Next time, we are going to ask him about communication and human resources at work such as relations between superiors, staff and colleagues in his department. See you next time.