This time, we are going to ask Mr. Ryoke about his working attitudes and some methods he used to create better solutions for the work that he was involved in. 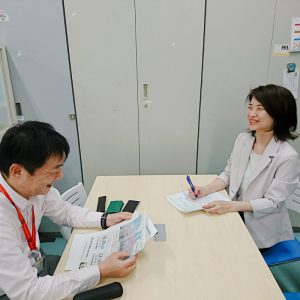 Q.
We have heard that you created an organized chart called “mind map” to show the analysis of challenges SMEs (small medium sized companies) had been facing and tasks/measures to tackle the challenges when you were in Manufacturing Support Office, Business Support Division, Department of Commerce, Industry and Labor.
How did you create it?

A.
At that time the section was newly established, so we decided to create support strategies for manufacturing industries.

To begin with, we teamed up with technology and business management researchers in the Prefecture and went for interviews with 100 small and medium-sized enterprises in the Osaka Prefecture.

Professional questions such as those related to industry and technology were asked by the researchers, and I asked other questions related to business management.

We extracted the tasks / issues from the results of the interviews from 100 companies and organized them by categorizing whether there were existing projects tackling each task / issue.

If not, we would need to resolve the issues by improving the existing measures or planning new measures. For example, “Issues of Residential and Industrial Mixed Area” (the area originally used to be full of factories, then, new residential buildings were built on the land due to the closure of some factories, and new residents currently complain about noise problem, etc.) were mentioned by the presidents of more than 80% of the companies interviewed; however, there were no existing projects which dealt with the issues, and no mention at all of that matter at Prefectural organizations.

Then, we wondered what Osaka Prefecture could do under the key word, “Issues of Residential and Industrial Mixed Area”.

To create a mind map, it is vital to listen to companies’ themes and managers’ intentions, regardless of the Prefecture’s policy and ideas.

When administrative organizations conduct interviews, they tend to ask about only the matters of which their section is in charge; therefore, they unintentionally miss out the tasks / issues arising from the companies’ point of view, and they cannot discover the new tasks / issues from mind maps.

Q.
What were the tasks for the Issues of Residential and Industrial Mixed Area? Have you found any solutions?

A.
To resolve the Issues of Residential and Industrial Mixed Area, the ultimate solution is to change the designation of “use districts” of the City Planning Act and to designate districts where only factories can be built; therefore, it is not a task which the departments and sections in charge of small and medium-sized enterprise support can perform.

In fact, presidents of those small and medium-sized enterprises knew the issues, and they also knew we could not resolve the issues.

However, they pointed out that it was unfair that we did not even listen to them, so we created a council with the municipalities where those issues had arisen in order to discuss those matters.

Then, we conducted fact-finding investigations and discussed what we could do other than changing the City Planning Act.

As a result, visible positive outcomes could be seen such as a part of the council member municipalities having made some rules and established regulations in their districts, involving some companies.

We, government officers, are so diligent that we don’t want to hear about tasks which we cannot deal with.

If we listen to the issues, we feel obliged to resolve them.

However, it was a good opportunity to realize that even if we can neither make measures nor provide subsidies, as long as we listen and think about issues, there is something we can do.

Surprisingly, we can resolve many issues just by listening about them. In many cases, the people having issues cannot put their thoughts together, but actually know the resolution.

For example, you sometimes ask your family what to wear that day, but you get irritated when you get irrelevant advice.

In fact, you know what you want to wear, so what your family can do is just listen to you.

The same applies to government offices.

It is important for government offices to listen routinely to what the person concerned says, not only to listen momentarily to implement existing government’s measures.

Listening to what those people are concerned about and thinking about what we could do for them sometimes enable us to find a solution.

Q.
If the government sets targets which are not suitable for actual situations or unrealistic targets, how do you react and deal with them?

I recognize that some government’s political measures are not suitable for actual situations and cannot fulfill the needs of actual fields, and this is inevitable.

Resources which help achieve the missions of your organization are not only the budget but also human resources and available outsourcing.

With this fact in mind, even if political measures don’t match the needs of actual fields, I try to find the ways to link them together indirectly and to connect them by using a broad point of view.

For example, Osaka Prefecture introduced a political measure to support industries where the life science and alternative energy industries were selected as growing fields among various fields under the concept, “selection and concentration”.

However, industrial composition varies in Osaka, so that only a small number of companies can catch up with this measure which is promoting only specific fields, and many of them don’t bother to try.

On the other hand MOBIO (Osaka Prefectural manufacturer support organization) is flexible for such various industrial clusters and supports companies trying to reform management and to launch new fields.

While supporting various businesses, we may find companies related to bioscience and alternative energy, we, then, can link those companies to the macroeconomic policy.

In the role of central or state government, they sometimes set political measures to promote specific fields; however, from the point of view of nurturing supporting industries, the field does not matter.

Let’s say even if the political measures don’t match directly to the company’s situation, as long as the mission of the company is not wrong, they can carry on dealing with actual work until the government complain.

Probably, you would be frustrated by worrying about an evaluation, as you ignore the measures as an organization.

However, you cannot do anything due to constitutional differences between macroeconomics and microeconomics.

Discordance between political measures and missions, and a feeling of being rewarded is rather good, so it is important to compromise to make the measures and actual needs closer.

Only the people working in the actual fields like us can link them.

Q.
There are many participants who are government officers claiming that politicians set political measures just to win the election.

A.
We have been through political interventions in Japan, too.

The more bribery and corruption cases were revealed repeatedly, the better regulations to prevent them have been introduced.

For example, nowadays, if a request for disclosure of “mediation mails” is made, all of them must be disclosed, so political interventions cannot be made openly.

Although there might be infrastructure and projects according to politicians’ conveniences, there is no use in criticizing them as government officers as long as they are lawful.

Government officers should skilfully utilize what comes up as a result of those projects to make use for the actual fields as much as possible.

If you still don’t like it, you cannot help but ignore it.

Did you enjoy this interview article? We would love to receive questions for Mr. Ryoke from you.
You can ask anything. Please send your questions to this email address.
prexglobalnetwork@prex-hrd.or.jp