At the fiscal 2011 Capacity Development Seminar for the Trade Promotion Between Central America & Caribbean Regions and Japan, held February 15 to March 16, the activities were not limited to lectures and visits to companies and organizations, but also saw officials and people join forces to put the products of their own countries on exhibit at Foodex Japan, Japan’s largest food products trade show, and to hold business discussions with buyers at the venue. 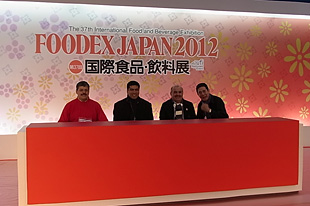 In this seminar, participants were able to exhibit products at Foodex Japan, Japan’s largest food-products trade fair, a first-time feat for PREX. The participants all let out a sigh of relief once the preparations for the exhibits finished.

Utilizing 3 years of study, a practical education in trade dea

The themes of this seminar were the special features of Japan’s market and the preferences of Japanese consumers. The participants selected products from their own countries suited for export to the Japanese market. An alliance of public officials and private citizens studied the processes by which exporting to Japan could be realized. Until last year, the seminar’s content comprised lectures by specialists, trips to related companies and organizations, as well as field trips to Foodex Japan, Japan’s largest food-products exhibition, held each year in Chiba.

However, this year marked the final fiscal year of the three-year seminar series. So in order to make the seminar content more practical, rather than only having classroom learning, we enlisted the cooperation of former seminar participants who had since returned home. In light of the knowledge and experience learned to date, we exhibited at booths at Foodex Japan run by JETRO, and went through with this trial aggressively, going so far as to hold concrete business discussions. The screened seminar participants exhibited through public-private cooperation. In addition, they selected products whose exportability had been studied. At the seminar during the subsequent days, they considered the specific products to go on exhibit while through lectures and trips to companies and organizations, they refined their strategies over what would be accepted in Japan

The three countries of Costa Rica, Guatemala and Nicaragua exhibited dried pineapple, frozen fruit and cacao liqueur at Foodex. A large number of buyers visiting each of the booths were encouraged to sample the products, and concrete business discussions took place with those who showed interest. Each of the exhibitors formed valuable connections with business partners with future potential, and we managed to finish a seminar with great significance.

The seminar was able to succeed with its final objective of business matching, and it also had an extremely high-value evaluation by the organizations concerned as well. I think everyone wants to let out a cheer from the bottom of their hearts over the success of this tough seminar that spanned five weeks, which was buoyed by the enthusiasm and efforts of all the participants from the five countries in Central American and Caribbean region, who were not merely officials nor private citizens, nor simply individual countries. 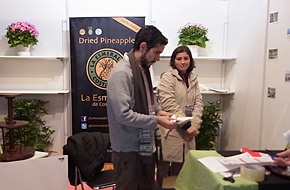 Participants from Costa Rica carry out preparations at a booth that displays dried pineapple. 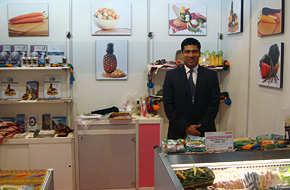 Mr. Victor of Legumex in Guatemala takes a rest after arranging various types of frozen fruit and vegetables. 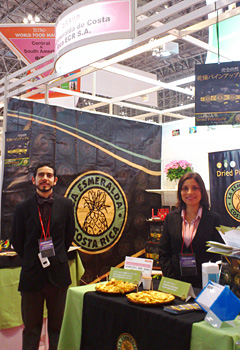 Mr. Joseph, left, of La Esmeralda in Costa Rica, who devised the elegant and eye-catching booth for dried pineapple. 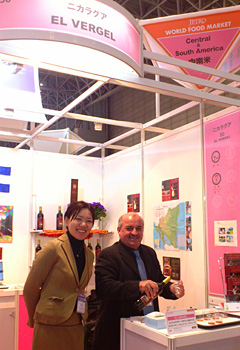