After being commissioned by the Japan International Cooperation Agency (JICA), we implemented the seminar for Small & Medium
Enterprise Development Policies (B) for nine public-sector officials engaged in SME promotion from six countries. Due to a strong demand for SME promotion seminars, we have been commissioned for the current fiscal year for a total of five seminar sessions with the theme of SME promotion. This seminar is for six countries: Bhutan, Cameroon, Jordan, Kazakhstan, Pakistan and Sri Lanka. The participants learned about the SME development policies conducted by the Japanese government and about activities by assistance-execution agencies as well as efforts by concerned corporations. At the same time, the participants from the six countries extensively engaged in discussions that focused on mutual learning. 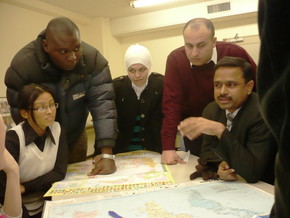 “Getting to knowing each other’s countries”

Participants from six countries took part in this seminar. On their application forms, some made requests to be allowed to learn something about the other participating countries, in addition to Japan. Discussions were taken up extensively as a way for the participants to teach and learn from each other.
The seminar’s first day was a chance to break the ice. Most of the participants had never been to each other’s countries, due to the great geographic distances between them. So they spread out a map and each explained how they had managed to get to Japan from their homes.
The locations of each of the countries and their major cities were examined, and everyone was surprised by the distances and areas of land involved. They also exchanged photos and gave basic explanations of their countries.
Thanks to this form of ice-breaking, everyone got to know a little of each other’s countries, enhancing the feeling of closeness.

The following day was devoted to sharing the situations in the participants countries concerning the seminar’s theme, the promotion of small and medium-size enterprises. The participants were divided into three groups and shared issues that involve SME promotion. Five common items were discovered.
These were technology, finance, bureaucratic systems, the entrepreneurial spirit and competitive markets. They brought up policies currently being implemented and other issues pertaining to the five common items. They clarified what points they wanted to learn in Japan as well as sharing with their fellow seminar participants the approaches used in each of the countries. Midway through the seminar, the six pillars by which the seminar was structured– assistance for management, businesscreation, finance, technology, human-resource development and internationalization – were split apart.
On cards, the participants wrote problem points that had arisen during prior lectures and field trips, and they educated one another on subjects to which they were able to respond. To cover the remaining subjects, they checked with their instructors and with the locations they had visited. In addition, in the course of drawing up action plans for after their return home, they divided themselves into two groups and presented their drafts within their respective groups. While trading advice with the aim of enhancing their drafts’ feasibility, they were also able to listen to comments on points they had failed to notice by themselves. Many of the participants told us that this was a beneficial process. On the final day, the issue was raised of “the benefits and challenges of globalization,” which was drawn up by the participant from Bhutan.
The thoughts and ideas of each of the participants were shared regarding globalization and one’s own mission. At the end of the session, cards bearing messages for one another were exchanged before the seminar came to an end. A wide range of information and thinking were shared and learned among fellow participants in a congenial atmosphere. I believe bonds were forged that will continue long after the participants return home.