PREX implemented the Executive Management Seminar for Malaysia for a nine-year period till 2005, as part of that country’s “Look East” policy. Commissioned by JICA, the seminar was attended by more than 300 public-sector officials from various ministries and agencies of Malaysia. From 2006, on the request of the Malaysian side, the seminar was divided into “junior” and “middle” levels of management, and so two different seminars were developed and structured. We recently implemented one of them, the Management Training Program for Junior Officer. Twenty public sector officials, selected from 15 central government organizations and one local government, studied practical Japanese management in a wide range of areas, from the ideas that underpin Japanese economic development to specific problem-solving methods. 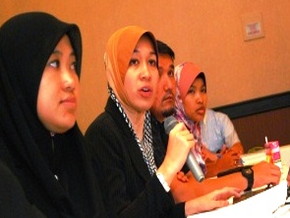 Ms. Izza, center, a seminar participant who spoke passionately at an exchange of opinions session in Mie Prefecture.

Japan’s forte is its “demonstration of total team power”

Malaysia is one of the 10 countries that comprise ASEAN and it has shown steady economic growth. On the economic front, the country managed to ride out the Asian currency crisis of 1997 that had spread from Thailand from relatively early on. Later, it was hit by Lehman shock, after which its growth became negative in 2009, but until then maintained an economic growth rate of 5 percent. On the political front, Malaysia has been shifting its focus away from Japan and South Korea and toward strengthening its ties with China, whose rise has been remarkable. Given that situation, the implicit concern has arisen over the significance for Malaysian public-sector officials of taking seminars in Japan. As a matter of fact, when I asked for the former participants to create a group email address so that we could reliably keep in contact, one of them set up a much more convenient “virtual office” over the Internet for me. So clearly, this is an impressive group of people, who come from a country that designates the IT industries as a field of economic importance. So for this latest seminar, in order to dispel some of the worries, we asked the instructors to touch on the question about the significance of learning in Japan. As a result in our action plan, which was the sum of the seminars, we included entries titled “respect for team members” along with “reform.” In the individual reports, we noticed the keyword “harmony” from time to time. For the participants, who if anything are imbued with a strong sense of individualism, the “demonstration of total team power” as shown by the world championship won by the “Nadeshiko Japan” women’s soccer team served to reveal Japan’s forte — a place where a person should study.

A special feature of this seminar is the visits to local governments and the sessions where opinions are exchanged with public officials at the sites. This activity had been an issue for improvement, and it was created in response to a large number of requests from participants and from the need that, “We’d like to have more exchanges with publicsector officials who have the same positions as ourselves. ” We received cooperation from the Mie Prefectural Government Office, Kameyama City Hall and Sakai City. Opinion-exchange sessions took place and received a favorable reaction. When PREX sent each of the participants an email of gratitude after they had returned home, we promptly received responses from everyone expressing enthusiasm, saying that they had learned a lot about management in Japan and that they wanted put the things they had learned in Japan into practice at their own organizations. In the meantime, we would like to continue to ramp up the program further and hold seminars that provide even greater added value. 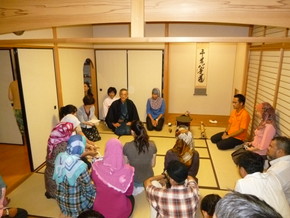