Aiming for seminars in Japan that connect with putting activities into practice in home countries (Aug. 25 Sept. 16, 2011)

The aim of this seminar is to tackle the creation of new industries that vitalize the cultures and resources of the participants’ various countries and regions, as a way of reducing poverty. Eight people from six countries participated in the fiscal 2011 seminar. This was the fifth year the seminar has been held. After returning to home, the participants have increasingly produced many solid results over time in their home countries. Therefore for each seminar, we apply various innovations and make efforts and have assembled a program designed to expand on the seminar results, if just by a bit. This year we linked up via a teleconference for the first time with people from five countries who had participated in previous seminars. They reported on the state of the practical application of their action plans, and we held an exchange of opinions. This trial led to a lot of stimulation and motivation for this year’s participants. 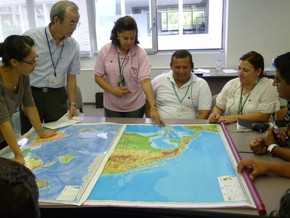 Seminar participants stand around a large map of the world,
explaining each of their backgrounds. This was an icebreaking activity so that we could form good teams.

Breaking the ice and an introductory seminar

Not only for this seminar, but for the seminars in general, many of the participants meet each other for the first time when they come to Japan. Even though everyone was born in the Spanishspeaking countries of Central America and the Caribbean region, if there is a degree of awkwardness among them, then they would not be able to initiate real discussions or action plans during the four-week period. On the first day, the ice was broken in the first step of forming good teams. We spread a huge map of the world on a table. While they pointed out the towns where they born, raised or lived with their families, they each explained their upbringing and work experience and indicated the routes by which they arrived in Japan. A female participant had to change planes seven times to get to Osaka. However, her luggage was still somewhere up in the air and so she took part in the seminar while borrowing the baggy clothes of a male participant. At night, everyone hit the town for a welcome party where the course leader, Professor Murata of Nara Prefectural University, joined them. The Central American participants, a cheery bunch by nature, overcame their nervousness, and there were endless toasts all around.

In the introduction of the seminar, participants shared the issues and problems confronting each of the participants and their home countries and their vision for the future, and they exchanged opinions with the Course Leader, Professor Murata, in attendance. During the lectures, they also learned about ways of thinking about and proceeding with regional promotion.

The seminar participants learned, from various angles, practical case studies on regional promotion in assorted locations in the Kansai region.
The case studies covered Harie, Takashima town, Shiga Prefecture, whose “riverbank” lifestyle has itself become a tourist attraction; Nagahama, Shiga Prefecture, which is carrying out town development through public- and private-sector links that have vitalized regional tourist attractions (Kurokabe) and culture (festivals, etc.); Nara Ateliers Road in Nara Prefecture, which is a network of artisan workshops scattered throughout the area and serves as the base of regional promotion; and “Irodori” in Kamikatsucho, Tokushima Prefecture, which has become a byword for regional promotion in areas of underpopulation. The participants visited such places that seemed to offer ideas or eventual development potential in their home countries. After the visits, discussions were held on each case study, and the participants organized the content they learned from the case studies and considered methods by which they would be able to apply the content to their own cases.
During this process, they compiled the strengths that should be able to vitalize the regions in their home countries, the weaknesses that would need to be overcome and the culture and assets that no one is aware of. They expanded on the things they need to do and on their vision of how to proceed.

A meeting on action-plan progress via a teleconference

This fiscal year saw a first in the seminar’s history: Via a teleconference among six countries, participants shared the progress of action plans drafted until last year by those who had returned home, while guidance by instructors and discussions by participants were held. Previously, a seminar series would be considered finished after the submission of progress reports six months after the end of the seminar. But we reflected that by only doing this, it was difficult to link the past seminars and the successful results of their practical application with the action plans or stimulation and motivation beyond the following year. Therefore, by sharing the practical situations of the plans of the senior participants in real-time, though it is merely by images on monitors, and by exchanging opinions, we were able to span across the fiscal year and engage in efforts that passed on the seminar’s PDCA. In this seminar, there were 41 participants who had visited Japan four times in the past. Eighteen of them rushed to JICA Centers in the capitals of their respective countries, despite being busy. This time,we received progress reports containing details of the action plans for four countries. Not all the case studies were successes. Even so, the content learned in Japan and solidly successful results in the participants’ home countries definitely provided all of the participants with a strong sense of motivation. In particular, those receiving the most stimulation were eight people who took part in this year’s seminars in Japan. The vision of putting participants’ own plans into practice after returning home seems to have exerted a positive pressure on the seminars.

When the participants first came to Japan, their action plans were vague. But through the lectures, discussions, analyses of case studies and a teleconference, the plans gradually took form and developed elements of feasibility. The day before the final ceremony, everyone presented their results and promised to put their plans into practice. The participants in the current fiscal year made three oaths after presenting their action plans:
1) To be proud about the natural culture, history and people of their own countries and of Central America and the Caribbean region.
2) To use the seminars they took in Japan as a good opportunity and to possess the will to make the best use out of them.
3) To believe in the abilities of their colleagues and also to carry out activities for the sake of the development of regions and Central America.

I would like to give heartfelt cheer to the participants’ teamwork, diligent efforts and their activities to put the fruits of their seminars into practice after they return home.