The Financial and Technological Support for Small and Medium Enterprises Promotion (B) Course in fiscal 2013 was held from Oct. 9 to Nov. 8, 2013. The objective were the sorting out of information on the points to remember when SME policies (mainly for financial and technical support) are implemented and the drawing up of action plans for SME promotion to make proposals to the participants’ institutions after their return home. This time, in particular, we implemented the seminars had added improvements to the creation process for action plans. 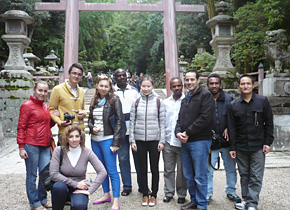 seminar participants learned about Japanese history through trips to Nara, Kasuga Grand Shrine and Todaiji Temple, as part of the “Japanese culture appreciation” program by the Rekishi Kaido Promotional Council.”

The courses on SME development policies

This seminar was implemented for 10 people from 10 countries: Tajikistan, Ethiopia, Cameroon, Solomon Islands, Bhutan, Moldova, Mongolia, Montenegro, Lebanon and Jordan. The nurturing and promotion of SMEs are recognized as important issues for developing countries. As for the effects of SME promotion, these businesses are expected to increase employment and lead to improvements in national finances and balance of payments, and in Japan, the desire to learn about case studies of SME promotion is growing.

The objective of this seminar is to create action plans for SME promotion while organizing information on the points to remember when SME policies (mainly for financial and technical support) are implemented and to make proposals for SME promotion to the participants’ institutions after their return home. This is done by acquiring knowledge related to Japan’s SME promotion policies and measures and sharing their successful results with the participants’ institutions. 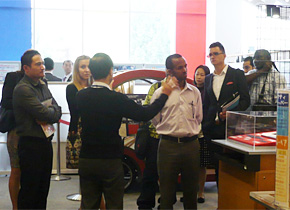 Nearly all the seminar participants wanted to apply the techniques for business matching in MOBIO and sustainability initiatives. 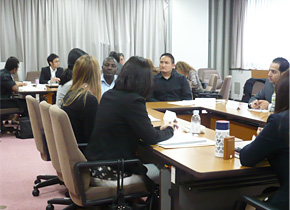 Through METI Kansai, opinion exchanges were held in addition to the lectures. Information exchanges, taking place behind the scenes with administration offices, were quite lively.

Before coming to Japan, the seminar participants submit written reports on the problem areas for SME promotion in their own countries. Although it is good if they can create action plans for these issues from the content learned in Japan, they do tend to select themes that have left a strong impression on them, given that the amount of information they learn is considerable. Therefore, action plan selection sheets are made available. These sheets categorize knowledge related to SME promotion policies and measures into the items of: “What is needed for application in my own country?” “Do we have these policies and measures in my own country?” and “Even though they exist, are they fully functioning or are they inadequate?” The sheets cover all of the content from the trips and lectures during the seminars, and each one becomes a way of documenting the necessity level of policy application in the participants’ countries.

Degree of completion of the action plans

The action plans’ feasibility was enhanced by the selection of appropriate themes, I believe. The seminar participants will implement their plans after gaining approval for them at their institutions after they return home. I look forward to seeing the progress from the action plans in a year’s time, as I believe the action plans are more persuasive now than ever.