PREX has received a message from a seminar participant of Malaysia.

We are very happy to receive letters from ex-participants. Here. 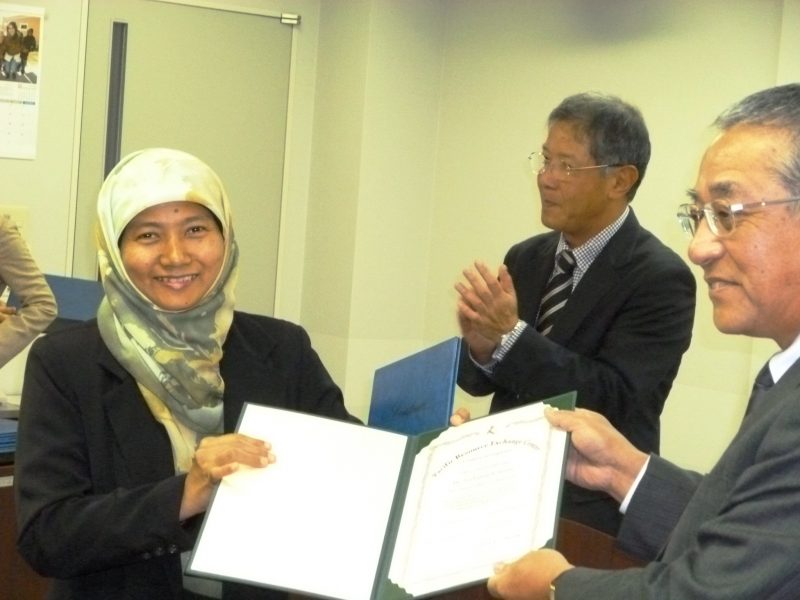 after the end of the seminar. The writer is the left.

Introduction to Malaysian CultureCulture and Society
A Multi-Cultural Society
Malaysia is a multi-cultural society. The main ethnic groups are the native Malay, as well as Chinese, and Indians. Its total population is 28.3 million (year 2010) where the Malays were the predominant ethnic group in Peninsular Malaysia which constituted 63.1 per cent. When visiting the country it is clear that the ethnicities retain their religions, customs and way of life. The most important festivals of each group are public holidays. Despite the ethnic differences there are cultural commonalities shared between those races.Language in Malaysia
In Malaysia, the language is officially known as Bahasa Malaysia, which translates as the “Malaysian language”. The term, which was introduced by the National Language Act 1967, was predominant until the 1990s, when most academics and government officials reverted to “Bahasa Melayu,” which is used in the Malay version of the Federal Constitution.Group Orientation
The family is considered the centre of the social structure. As a result, there is a great emphasis on unity, loyalty and respect for the elderly. The family is the place where the individual can be guaranteed both emotional and financial support. When one member of the family suffers a financial setback, the rest of the family will contribute what they can to help out. Families tend to be extended, although in the larger cities this will naturally differ.Etiquette and Customs
Meeting and Greeting
Greetings in a social context will depend upon the ethnicity of the person you are meeting. In general, most Malays are aware of Western ways so the handshake is normal. There may be slight differences though and a few things to bear in mind include:
• Due to their religion, the Malay shake hands with members of the same sex only. The alternative way to greet them is by bowing while placing their hand on their heart.
• The Chinese handshake is light and may be rather prolonged. Men and women may shake hands, although the woman must extend her hand first. Many older Chinese lower their eyes during the greeting as a sign of respect.
• Indians shake hands with members of the same sex. When being introduced to someone of the opposite sex, nodding the head and smiling is usually sufficient.Names
The way names are used also varies between ethnicities:
Malays
• Malays do not have surnames. Instead, men add their father’s name to their own name with the term “bin” (meaning ‘son of’). So Ali bin Atan; would be Ali, the son of Atan. Women use the term “binti”, so Murni binti Atan is Murni the daughter of Atan.Chinese
• The Chinese traditionally have 3 names. The surname (family name) is first and is followed by two personal names.Many Chinese adopt more Western names and may ask you to use that instead.

Indian
• Many Indians do not use surnames. Instead, they place the initial of their father’s name in front of their own name. The man’s formal name is their name “s/o” (son of) and the father’s name. Women use “d/o” to refer to themselves as the daughter of their father.Games & Pastimes
Malaysia strong sense of community is reflected in their traditional games and pastimes such as silat, sepak takraw, wau, gasing, congkak, chingay and many more.Wau
• Wau is a traditional giant kite that usually flown after the rice harvest season especially popular in the state of Kelantan, on the east coast of Malaysia.Gasing
• A gasing is a giant spinning top that traditionally played before the rice harvest season. This game requires strength and coordination that usually shown by a highly skilled and experienced player.Congkak
• Congkak is a game of mathematics played using oval solid wood blocks with two rows of odd numbers holes and two large holes at both ends called rumah or home. It is played by two players using shells, marbles, pebbles or tamarind seeds.Prepared by: Norhaliza A.Halim
Edited by: Nik Noraini Nik Ya ..