HOME > PREX island > Lecturers / Specialists > Designing tourism: you should be loved for it!

Lecturers / Specialists Messages
Designing tourism: you should be loved for it!

I have conducted various types of field work in such places as the Galapagos Islands, Fiji Islands, Iriomote Islands and Minami Daito Island for the sake of research and the study of eco-tourism. With eco-tourism, I draw up plans that promote tourism that places the people in the regions as the core players, so that the regional resources are conserved and regions invigorated. Through case studies from Japan and overseas, I tell the seminar participants about the five steps. They start with a “treasure search,” which can be boasted about to the outside world, and then “refinement,” “boasting,” “transmitting” and “promotion” of the industry.

I state at the university that: “Skills can be learned after you leave university, so learn the seeds.” Even after you’ve entered society, those seeds can be reared by the senior people around you, just as long as you possess the seeds. The important thing is whether or not you have the seeds, and anyone with only a few pockets of spirit can fail and falter. People who think seriously and people who appreciate others and respond to them will develop even if they lack the skills. I think it’s good if the people through the seminars are given additional seeds, if even just one.

Even though I have conducted research activities overseas, I have had no connection to the Middle East region. When we speak about the Mideast, the sole image we get is of a region of never-ending conflict. Yet by coming into personal contact with the seminar participants, I have been made aware of its many charming tourism resources, such as its history, culture and nature that have been handed down from ancient times, and the kindness of the people.

In the future as well, I would like to cooperate with PREX, Yoichiro Takanashi of the Japan Ecotourism Society and Takeshi Naruse of Reitaku University and also learn through discussions with the people of the Middle East. And above all, if in the one-month of the seminar period the participants have the opportunity to implement their action plans in ways that draw out the wisdom toward their love of country, pride and further development, I would like to go to the local places and be part of the cooperation. *Mr. Akio Maita’s homepage is at: https://akio-maita.com/ 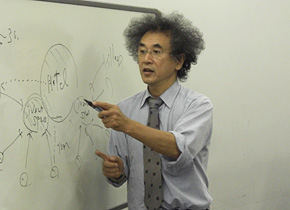 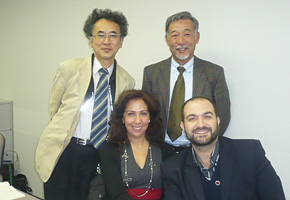