The Training Course on Syria Synthetic Business Management was started from 2007 and its Ex-Participants, mainly Mr. Khaldoun Dadou (2008), Deputy General Manager of Damascus Chamber of Industry and Mr. ALSHAMI Mahdi (2009), Executive Manager of RAMCO, have carried out a seminar on Kaizen activities that were learned during their seminar in Japan, and they contributed to the spreading of Kaizen activities locally. In addition, they were cooperating with people who participated in the 2008 and 2009 seminars and have visited, in order, the Monozukuri-related companies that they work for. They are also developing positive activities such as implementing proposals of mutual trials related to Kaizen activities. 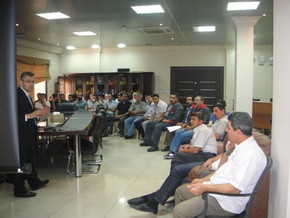 Scene of a seminar implemented in Syria by
returnee participants.