Kyrgyz, Japan’s SMEs are the hometown of the heart (Oct. 2012)- PREX Island

Ex-participants Messages
Kyrgyz, Japan’s SMEs are the hometown of the heart (Oct. 2012)

Japan’s SMEs are the spiritual home

“Unique Technologies ” (Kyrgyz Rep.) is an IT business established in 2007. Director of this company is Mr.Azis Abakirov, who was also selected as Kyrgyz’s representative businessman.

Mr.Abakirov has admired Japan since a small child. He studied Japanese language and started up businesses so that he could do work to serve as a bridge with Japan. After attending the JICA ‘s course on Strengthening of Economic Organizations in Central Asia , FY 2009, he returned home and established a lab through links between the IT world and universities. He made policy proposals to government of Kyrgyz, contributing to the development of the IT industry in Kyrgyz. Even as a director of his own company, he is continuing his efforts to achieve his objectives.

Mr.Abakirov often comes to Japan for business, and he participated in the PREX symposium that opened in February 2012. As an alumni member, he commented in Japanese: ” Kyrgyz businessmen who participated in PREX’s seminars continue doing their business management thinking of Japan’s SMEs as their spiritual home. I hope the cooperation of human resourse development for businessmen continues in the future as well.” 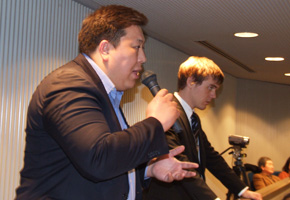 Mr. Azis, who managed to make it for a PREX symposium in February 2012.