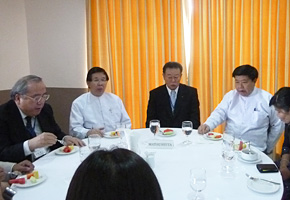 Myanmar alumni members gather for some friendly discussions. The Myanmar alumni association director, business delegation chief and Vice President of Panasonic, Masayuki Matsushita, is center, and the President of the Union of Myanmar Federation of Chambers of Commerce and Industry, Win Aung, is at the far right. Scenery of Myanmar

During a trip that we made in October last year to Myanmar as part of the Kankeiren Business Delegation to Myanmar and Thailand, 14 former seminar participants who have returned home showed up to hold friendly talks with the delegation. One participant brought a book featuring the management philosophy of Panasonic’s founder Matsushita Konosuke and nostalgic photos taken at the time of his seminar. “I’ve been using Panasonic products for many years, so it was great to have visited Panasonic,” he told us. Regardless of the amount of time spent in Japan, the participants talked nostalgically about their seminar experiences, as they suddenly dug up old memories, saying things like: “Do you remember when this happened?” and, “I met Mr. A recently, who was with me on the seminar.” We are extremely happy to have made friends with people who will always have nostalgic thoughts toward PREX and will always stay in touch. In addition, another former participant said, “Business is expanding due to imports from Japan. I plan to visit Japan sometime soon.” So we expect to see a deepening of ties from now on.
By the way, most of the old seminar participants from Myanmar are company managers. Having started in an era of strict regulation, their management style is robust as they attempt to expand amid all the changes taking place. One participant told us he is sending his children to school in Singapore and preparing to compete with companies around the world. Another comes to Japan around once a year as he wants to promote cooperation with Japanese companies. Another is building a business to import used cars from Japan, which are currently part of a boom. Another has been enlisted to give presentations on Myanmar’s economy and industry to investors who come from abroad. All of them appear set to play an important role to assist in Myanmar’s future development. We may even see former seminar participants on the world stage after becoming the dominant players in Myanmar.