The company manufactures and processes a wide range of products, large and small, from parts for aircraft and the H2 rocket to spindle units. Its factory has the “aerospace company” certification from Kawasaki Heavy Industries.
2008: Selected by the Ministry of Economy, Trade and Industry as one of 300 “energetic” Monodzukuri SMEs that “help support Japan’s tomorrow.”
2009: Selected among 193 companies as an “Osaka Energy! Monodzukuri Company, and Monodzukuri Banner Company
2012: Recipient of the Minister of Education, Culture, Sports, Science and Technology Award 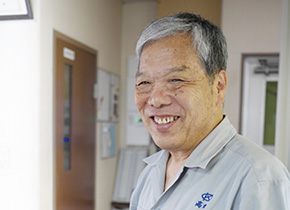 ＜▼Hojo of PREX＞
Thank you, Mr. Takata, for your cooperation the other day for our seminar. Government officials from a variety of different countries have paid you visits, and all have returned home as “Osaka Kousakusho fans” after they were impressed by your management philosophy. Today I brought a new pamphlet, as PREX changed chair persons in June. The new chairman is Kiyoshi Otsubo, the Chairman and President of Rengo Co.

Mr. Otsubo is a person I respect. When Lehman shock occurred, large corporations launched restructuring efforts. But he didn’t resort to that, instead taking such measures as giving regular positions to his temporary staffers.
At our company, sales fell by around a half, and we cut executives’ remuneration by half without restructuring. My own compensation was zero. My first experience of a recession was Japan’s bubble period. Sales then shrunk by a third, and for three months I suffered insomnia. Lehman shock was the second time for me to experience recession, so I was stronger that time around. The company’ work volume was half, yet I told my employees, “We won’t reduce staff nor cut pay. The situation will definitely recover. Until that happens, let’s upgrade our technologies to demonstrate our power to an even greater extent.” By the time the economy recovered two years later, all of our employees had traveled on an uphill road.
Large companies had restructured, and I believe that important employees were lost, motivation fell and the companies themselves worsened.

I would like to tell people overseas that what makes Japanese Monodzukuri so wonderful is the lifetime employment system.

In the belief that “making a company appealing equals putting everything up for show,” Osaka Kousakusho discloses everything it has: its sites, technologies and quality control. I don’t remember who was in the latest PREX seminar, as we are always hosting companies, local students and field trip groups from overseas. The people from overseas who come on field trips are enthusiastic. Around 30 young researchers once came from China. They seemed to be completely in the dark when told, “The thing that makes Japanese companies proud is the lifetime employment system. This company devotes a year to training its people.” During a sit-down discussion, they asked a barrage of questions, with an interpreter in the middle.
At the end, they said, “We don’t comprehend it, but we think it’s correct in terms of the way people work. We believe it’s right for a country’s development.” In China and South Korea, there are no approaches to thinking about companies teaching technology. But I think they should be as part of a national system. 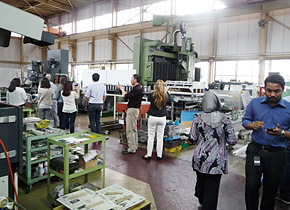 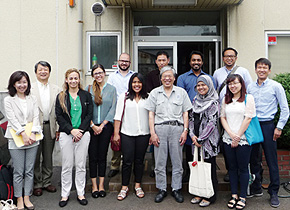 Wanting everyone to become leaders with dreams, romance and a mission

We are working on a “25 year old young president project” in Higashi Osaka. People at Fusekita High School and some companies are working together on the program. Company managers speak to high school students for 19 hours. Many kids live in environments where they can’t tackle their studies. So this was planned with the idea that they themselves should become company presidents. The employees may think this is going too far, but I feel I will do something in this region where we are living, being united with society. Good results are always produced through dreams, romance and a mission, even with the smallest budgets. I also hope that the government officials taking part in the PREX seminars return home and become leaders, doing their best for the sake of SMEs. It’s the same wherever you are. A single leader always has people around him when projects are going ahead, in order to launch new and interesting things. We are talking and hoping that people — as members of a single organization — make new things that don’t become small.

＜▼Hojo of PREX＞
Thank you very much, Chairman. We create seminars, and I think they would not be successful were it not for content that awakens the participants and resonates in their soul. The participants heard about management philosophy and human-resource development from you and were guided around an actual factory. It appears they were deeply moved by the true strength of a Japanese Monodzukuri site. Through the seminars, I would also like to increase the number of worldwide fans of companies that are attractive to visit as PREX destinations. Please share your stories with us again.