I would like to talk about my impressions of lectures for alumni follow-up activities in the three countries of Kazakhstan, Kyrgyz and Uzbekistan; sessions with seminar participants; their visits to companies; and discussions at the JICA Japan Center.

The 3 countries’characteristics, situation with seminar participants

The three countries each have distinctive features. As for Kazakhstan, the political-economic system now in the works can be summed up in a single phrase: a petro state. In other words, the country is heavily dependent on oil, and the state has sweeping authority to re-allocate oil revenues. Kyrgyz is adopting democratic policies, although the ethnic, political and other “pressure groups” are having a difficult time aligning themselves, and there is a sense of instability regarding the freedom movement together with social conditions. Uzbekistan’s international economic exchanges are limited. But since the 1990s, its import-replacement policy and assistance for domestic industries have been showing successes. The particular features for each of the countries have an influence on the situations of the former seminar participants. The Kazakh participants are grappling with specific problems faced by the companies where they work, and they attend the seminar to solve them. In Kyrgyz, fundamental education on management is most important, as basic knowledge on the ways of doing business is lacking. Uzbekistan has created a distinctive business environment, and so there are expectations the seminar participants will “search for new ideas” in order to succeed in this environment. 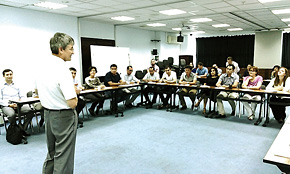 A lecture in Uzbekistan given by Professor Belov. In attendance are 77 alumni members from three countries.

Keen interest in Japan with common bonds and feelings of gratitude

Various things are demanded from these seminars. However, the participants from the three countries have something important in common: a keen interest in Japan and feelings of gratitude. The questions we get in class are not limited to Japan’s economy or management. Rather, we have discovered an absolute desire to know about the situation in Japan’s provincial regions, its welfare system, population trends, and so on. These seminar participants have become the most faithful friends of Japan among the various countries. And for the work we do, isn’t that the most important accomplishment of all?

If we were to compile three conclusions for the future seminars, the first would be shifting the most important points in my entry lectures from matters that concern major corporations, such as corporate governance, “keiretsu”/corporate groups, relations between labor and management, etc., to small and medium-sized enterprises (SMEs). With No. 2, it would be desirable to explain the special features of the Kansai region, Kyoto, Osaka and other places to explain the environment where the SMEs are active. For No. 3, I want to actively continue the follow-up activities. I would like to decide on these through consultations with various people from PREX and the seminar participants on what would be needed to achieve that.

Andrey Belov, Professor at Fukui Prefectural University, has been asked to lecture for PREX’s seminars since 2007. A Russian, the professor manages to lower the barriers for understanding Japan by lecturing the seminar participants in the Russian language on the Japanese economy and management. Furthermore, he has given direct explanations to the participants who first arrive in Japan in response to their doubts and concerns, a reason why his lectures are always so highly regarded. To date, Professor Belov has been associated with the seminars from the position of a visiting lecturer. In the recent alumni follow-up activities, he participated in the position of PREX adviser and gave lectures in all the countries. He accompanied the group for presentations and on the trips to former participants’ companies. He has kindly given us advice on verifying seminar results and enhancing future seminars.