HOME > PREX island > Lecturers / Specialists > The significance of seminars in Japan that look back, together with instructors

The significance of seminars in Japan that look back, together with instructors- PREX Island

Lecturers / Specialists Messages
The significance of seminars in Japan that look back, together with instructors

We asked Mr. Kada (professor at Shijonawate Gakuen University and professor emeritus at the Research Institute for Humanity and Nature) to serve as instructor and course leader for the seminar, which aims to “create towns’ treasures” and be “a moving seminar.” From the stance of a Japanese agriculturalist and environmentalist, he provided guidance on such points as the situations of farming village development and natural industrialization in Japan, the securing of human resources and regional development projects, with a view toward Colombia’s regional industries and tourism promotion. After the seminar ended, we asked him his thoughts about its significance.

The reason the seminar was a success was, above all, that the initiatives in Japan’s regions that we observed were so fantastic. At first, I sometimes wondered whether there was anything the Colombian participants could learn when they visited Japanese rural districts. But after we actually went to the sites, I myself renewed my own understanding of Japan’s regional strength. One of the key phrases of the regional efforts was, “Linking tradition with modern times.” The various regions integrated the “treasures” remaining there, including history, culture and tradition, generated “wisdom,” and connected it with the “now.” This perspective can be linked to some kind of initiatives, regardless of country or region. They can certainly be incorporated into the activities of the Colombians. The second point is “the role of the local authorities.” In Japan’s regional districts, local governments work in alliance with the private sector, fulfilling their role of drawing out each insufficient part and connecting it. This aspect is weak in developing countries, so it is extremely useful to learn about. I think realistic initiatives associated with various regions in Japan — not just new marketing techniques from the advanced countries — can be extremely useful in the scenarios of industrial formation and regional development in developing countries 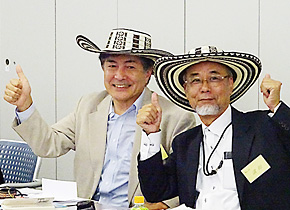 Professor Kada and Professor Toshimichi Sawada of Tottori University are presented with caps from Colombia on the seminar’s final day.

The seminars are not “one sided,” whereby the Japanese side teaches the participants, but learn bilaterally. Rather, they have a “resonance.” The Japanese people wonder about the kind of reaction people from overseas will have toward our efforts. So this is an opportunity for them to move their own activities further forward in a positive direction. I believe that is one of the important things about the seminars. They will be continued in the next fiscal year. As a next step, I would like to create an environment that enables more mutual learning and trial and error. I look forward to seeing both sides come up with approaches for solving problems and with insights, with the aim of having a forum of mutual learning by creating synergies, revolving around issues shared by Japanese people and Colombians.