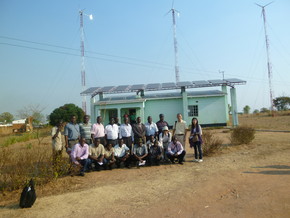 A solar-windhybrid power generation facility in Malawi is in the background.

Mr. Golden NYASULU of the Department of Energy Affairs in Malawi’s Ministry of Natural Resources, Energy and Environment, who recommended the latest follow-up activities, was a participant in the FY2010 the Group Course on Planning Support for Introduction of Solar Power Generation (B). It left me a strong impression that he worked with great enthusiasm, saying “ I want to change Malawi to be like Japan”. Within only a year of returning home, he made the request to the JICA Malawi Office for the follow-up, and the request was accepted.

The objective of the follow-up activities was to carry out information-sharing and opinion exchanges with all the relevant government offices and organizations within Malawi about what participants gained from the Japan-based seminars and the subject of promoting solar power generation.. Therefore, the first day of the seminar involved an inspection tour of a solar village by participants in a workshop, and on the second day the workshop was carried out.

Inspection tour of a solar village

The Department of Energy Affairs in the Ministry of Natural Resources, Energy and Environment, where Mr. NYASULUworks, has established six “solar village” project sites in Malawi. We inspected one of them, the Chigunda Solar Village. Japanese-made solar panels and Indian-made batteries are being used by the solar- and wind-power hybrid facility in the village. Technological problems, such as system-design problems when measurements were made using measuring instruments, were revealed. In addition, we discovered several problems involving the corrosion of electric poles and flaws with the water pumps, and the issues could be shared by people involved in this field.

On the second day, a workshop was held that was attended by staff members of government offices and organizations involved in encouraging renewable energy in Malawi. Presentations were made by six people, including Mr.Toshiyuki Hayashi and Mr.Tadayuki Ogawa, senior advisors from Japan International Cooperation Agency (JICA) who had come to Malawi for this project, and Mr. NYASULU, and Mr. Douglas KAMANGA, who previously attended seminars in Japan and have since returned home. Lively question-and-answer sessions took place for their presentations. After the presentations, the issues for promoting renewable energy were written up on a whiteboard, and it is decided which organization will have a responsibility to solve each issue.. The decisions to share subjects and designate a responsible body, with the Department of Energy at the core, marked an achievement that exceeded expectations. I was able to remind myself of the significance and accomplishments of the Japan-based seminars.