PREX supports the activities of alumni associations, which have mainly been established by seminar participants who have returned home and are managed voluntarily, in all countries. We held exchanges and conducted follow-up activities with members from the first term of the PREX Cambodian alumni association, which was formed last fiscal year, and with club members of the Vietnam Business Course, which is managed by members who completed the Practical Training Business Course (Vietnam-Japan Center) implemented from fiscal 2009 (Sept. 15-25, 2013). 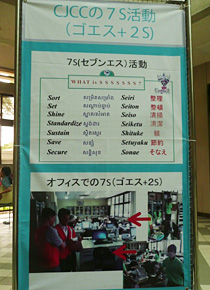 A “7S Activities” panel is displayed at the CJCC.

The PREX Cambodia Alumni Association is new, having formed after the participants in Japanese-style Management Centering on the Practice of 5S and KAIZEN at Japanese Companies, a seminar of the Cambodia-Japan Cooperation Center (CJCC) held last fiscal year, decided to put their enthusiastic thoughts into action. After completing the seminar, the participants returned home where, as instructors for the CJCC, they were highly involved in lectures already being conducted at the Center, symposiums, the mass media and so on.

It hit home to us how they were on the frontlines of activity. First, a banner showing the faces of last year’s participants could be seen on an outside wall of the CJCC, located on the campus of Phnom Penh University. Also, bills giving information on other lectures and symposiums could be found throughout the campus.

Later, five of the nine members who had come to Japan last year gathered at the scheduled time. We enjoyed spending time talking about how they are being active on Cambodian TV, radio and other media, having an exchange of opinions on future seminars to be promoted at the CJCC and also reminiscing about the time they came to Japan.

At the CJCC, the former participants showed us the appeal of the strengths of Japanese-style management, adding the two components of “saving” and “preparing” to the components of what is called “5S” in Japan, to make it “7S.”

Cambodia is essentially an agricultural country. Workers in the primary industries account for around 70 percent of the total, while urban populations in Phnom Penh and elsewhere are no higher than around 20 percent of total population. Yet at the same time, approximately 30 Japanese companies have entered a special economic zone on the outskirts of Phnom Penh, which we visited during this trip. In addition, building construction in the city has progressed, ahead of the establishment next year of a large-scale Japanese commercial facility.

Relations between the country and Japanese companies are predicted to deepen in tandem with the development of the Asian economies and the spread of globalization. And, we can expect Japanese-style Management Centering on the Practice of 5S and KAIZEN at Japanese Companies, which is advanced by the CJCC, to make a large contribution to the development of both countries in the fields of business activation and human-resource development. 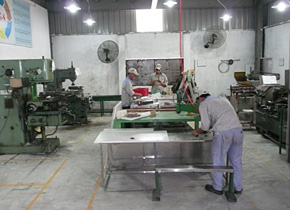 A “5S” board is posted at the factory (of iDMEA Co., Ltd. in Hanoi) of a former seminar participant, who is mindful of organization, orderliness and cleanliness. 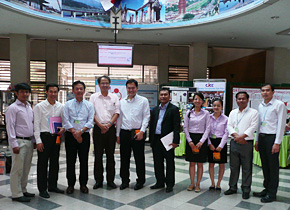 The visit to the Cambodia-Japan Center. Seminar participants who have returned home serve as lecturers at the center and are active as coaches to local business executives for Japanese-style management, 5S and KAIZEN.

The Vietnam Business Course is held by the Vietnam-Japan Center (VJCC), with as many as 52 Vietnamese companies participating in four terms over the last four years. We were reunited with over 10 people, mainly from the center and seminar participants in the fourth term, in Hanoi and Ho Chi Minh City, during a schedule that came before and after our Cambodia trip.

In Hanoi, we visited three companies owned by the former seminar participants and two industrial parks. Although there were discrepancies in scale and business type, the factories there featured 5S bulletin boards, and organization and tidiness were enforced.

Core members in the second and third terms were also visited, in Ho Chi Minh City. They kindly promised us future cooperation so that exchanges between Vietnamese and Japanese companies can become activated.

During this visit, we met 56 seminar participants and a variety of others who are active on the local scene. No matter what area we went to, we received a warm welcome, and the people also accompanied us on our destinations and extended a great deal of cooperation to us. We are extremely grateful for this kindness, and we believe that such links and relationships will prove useful for both countries, Japan’s globalization and business cooperation and exchanges.