For developing countries, for Japan and Kansai- PREX Island

PREX Members
For developing countries, for Japan and Kansai

Every now and then, we receive emails like the following: “I’m going to launch this kind of activity as an assistance measure for small and medium-sized enterprises”; or, “I’m studying overseas to upgrade my skills as an administrative official.” Seminar participants who have returned home and are working hard and seriously provide us with encouragement when we ask ourselves whether “the experience and knowledge from Japan has been useful.” From the summer of my third year in high school, I started to develop an interest in international cooperation, so it was “fate” that I was hired by PREX, and now four years have passed. During those four years, I have searched on a daily basis for “that which can be done” as I struggle and think about what things might be useful for seminar participants and their countries. In the week that followed the Great East Japan Earthquake, we received messages of support for Japan from seminar participants every day. Many emails arrived several hours after the quake struck on March 11, so I knew about the size of the disaster before confirming it on the news after getting home from work. As assistance from various countries is being reported by the media, the assistance Japanese people have continued to provide has borne fruit for establishing emotional attachments to Japan. Furthermore, PREX’s 20 years of activities have not only been for the sake of developing countries, but I also sense their strong power for fostering emotional attachments to Japan and to the Kansai region. So for the sake of developing countries, and in turn for Japan and Kansai, I would like to continue my day-to- day efforts while considering what I am capable of doing. 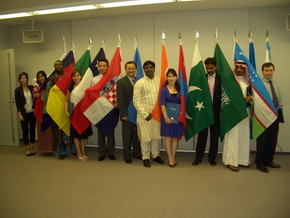