A glimpse of the future of Bangladeshi women- PREX Island

PREX Members
A glimpse of the future of Bangladeshi women

In the interludes between working through the schedule of each survey, I managed to observe at least one site of historical heritage! I used my break to go to Ahsan Manzil. Nicknamed the “Pink Palace,” this building was constructed as a facility for the French, although leading up to the country’s independence, it apparently had been used as a residence for the Nawab family, which ruled Dhaka at the time. There is a fee to enter the garden, but even so it was still filled with couples and students, as it seems to have become a spot for dates and relaxation for Dhaka’s residents.
Meanwhile, a dozen or so female junior high-school students crowded around me for some reason, and then we all took pictures. I guess they had wanted to speak English with a foreigner, but it showed the power of the female students. The country has a female prime minister, while in Bangladesh the improvement in women’s status is often raised as an issue. So I was able to get a sparkling look at the future of this country in the energy of its women. 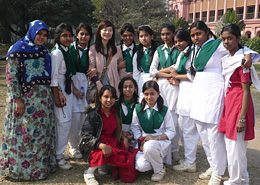