I took part in the Kankeiren ASEAN Mission from Feb. 10 to 16. My extremely hectic schedule came as a shock, as it had me holding informal talks with Indonesia’s Vice President and three Cabinet ministers of industry, trade and economic affairs on the first day. It was a similar situation in Singapore and Thailand, with informal talks planned with important government officials at my destinations. Notably in Thailand, an informal talk with Prime Minister Yingluck had been arranged. The efforts made by Kankeiren’s Secretariat together with how the different countries are focusing on Japan hit home to me.
Also planned were informal talks with local chambers of commerce formed by Japanese companies in Jakarta, Singapore and Bangkok. They all agreed on the necessity of human-resource development for middle managers.
In the 24 years since its founding, PREX has handled a grand total of 15,000 seminar participants via seminars in Japan involving Kankeiren seminars for managers in ASEAN, JICA’ seminars in Japan for developing countries and local seminars in developing countries made possible by the dispatch of specialists. However, I sensed the need for further activities in human-resource development.
During its recent trip, Kankeiren signed a cooperation agreement with the Federation of Thai Industries. One of its three pillars cites human-resource development. It states: “We are cooperating and tackling human-resource development in the fields of fostering small and medium-sized enterprises (SMEs), environmental conservation and preservation, energy saving, and so on.” I would like to cooperate with Kankeiren and take up the challenge of new human-resource development initiatives as an achievement of the document’s signing.
After the official events ended, I explained PREX’s activities separately with the Japan Chamber of Commerce and Industry in Bangkok, along with the Kankeiren Secretariat, and we explored the possibility of having some form of affiliation. Around that time, I received information that a scaled-down MBA at the Thai-Nichi Institute of Technology and the Japan-Thailand Economic Cooperation Society was being planned. I would like this to have an affiliation with the Kankeiren Secretariat and that it have some sort of concrete form in the future. 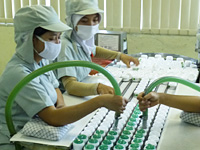 The Mandom factory in Jakarta 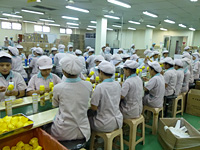 A labor intensive strategy is used due to high-mix low volume production. 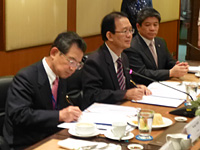