Tanzanian Participant— In the Land of Tanzania with Love- PREX Island

Friends in Japan, Take a Look at Our Achievements after the Seminar! (Ms. Digna Shauri Massawe)

Ms. Digina gathers farmers and instructs them how to cultivate vegetables in Meru District.

Ms. Digna Shauri Massawe, who participated in JICA Rural Agricultural Development for the United Republic of Tanzania in 2017, told us about her activities after returning to Tanzania. In Tanzania, agricultural development is thought to be one of the national strategies to achieve economic growth and reduction in poverty.

She works as a member of staff in Meru District, Arusha Region, which is located at the foot of Mt. Kilimanjaro and where vegetable cultivation is prosperous.

In this district, more than 75 per cent of people work as farmers; however, not enough thought has been given to harvest time and market expansion to increase sales. For such farmers, administrative officials and agricultural extension workers like Ms. Digina offer agricultural extension services to enhance their skills and to expand their markets. After returning to Tanzania, she has given advice to farmers and has conducted a “Demonstration Plot” to instruct how to make fertilizers for tomatoes and to transplant tomatoes, experimenting with new methods. She has also been taking the lead in activities of women and young people’s groups. During the seminar in Japan, she visited Izumi-no-sato—agricultural corporation which conducts activities in Izumi City. She was very impressed with the group activities by women, such as making miso paste, to achieve an increase in their income, and she said, “I would like to gather ten women to make a group as the first thing to do after going back to my country.” She has actually put her plan into action. She says that she gives instructions to farmers with love. 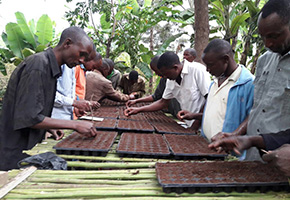 Instructing how to sow seeds. 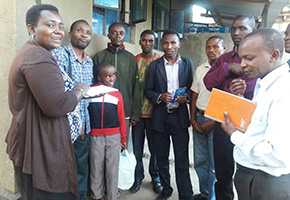 Exchanging opinions in a group of young people, which was formed to develop farming in Meru District. One of the first groups formed after returning. A female group has been formed.