“Foreign Export Promotion,” country seminar for the Republic of Serbia Aiming at exporting Serbian food products to Japan（Feb. 26 to March 14, 2013）

For developing countries, Japan makes an extremely attractive market as a destination for food products. Five seminar participants from the Republic of Serbia visited Japan in February and March and studied various fields, including the Japanese market, Japanese people’s preferences and marketing. The expertise of the participants covered a wide range, with a central government official from an agency involved in investment of trade, an official of a regional organization, a beekeeping association member, a member of an agricultural committee and a fruit producer. The seminar in Japan that covered three weeks, in addition to studying conducted while living in Japan, and the valuable knowledge that came from experience, will be utilized in the near future for exporting. 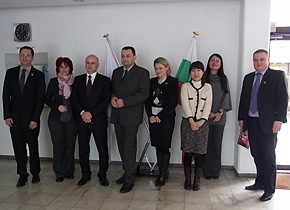 The seminar participants listen to the commercial counselor at the Bulgarian Embassy, as he explains some of the hardships of trying to enter the Japanese market.

Do you know Serbia?

How much do you know about the country called Serbia? A republic located in the middle of the Balkan Peninsula in Southeastern Europe, it was once a part of the Federal Republic of Yugoslavia. The country has a population of 7.26 million and covers an area nearly the size of Hokkaido. Five people from the Republic of Serbia visited Japan this time, and they learned about exporting food products to Japan. Being an agricultural country, Serbia is a major producer of berries (raspberries, blackberries, blueberries, etc.), while wine, honey, jam, grain, etc. are also widely produced. 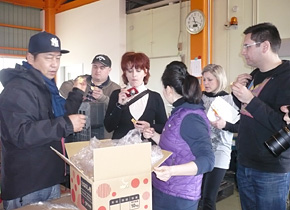 The participants listen to a representative at Horiuchi Farm in Gojo City, Nara Prefecture, as he talks about agricultural management. They learned about a business model whereby jam and other processed goods are developed nationwide through a sales strategy to add high levels of value, even though the processing takes place on a small scale.

Having faith in the products of ‘our country’

The seminar participants learned about the features of the Japanese market and Japan’s distribution system, the preferences of Japanese people and marketing methods. This was achieved through visits to a supermarket, winery, honey-producing company, design company, prepared-food maker, plantation, JETRO, an airport quarantine office and an embassy and also lectures by specialists and discussions. Of all the things they studied in the seminars, perhaps the most important was the sense that Japanese consumers would fully accept the flavor and quality of their products. I think that without a doubt the group members have faith in their country’s products and that this will be linked in the near future to their export-promotion activities. Unfortunately, Serbian products, such as honey, are exported to France and Germany, and they are then imported to Japan as French and German products. In the case of wine, it’s mixed with wine from neighboring countries and then brought to Japan. It’s a situation whereby the Japanese don’t know how good Serbian products actually are. I also tried some wine at Serbia’s booth and it was definitely on par with the products from the world’s best-known wine-producing regions. 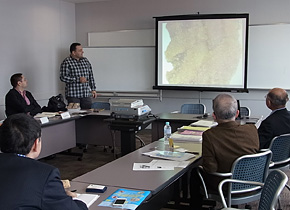 A participant explains Serbia’s honey industry. The quality of the country’s honey is high, but unfortunately, it’s available in Japan as a product made in France or Germany, countries where Serbia’s honey is exported to.

Experiencing unscheduled business talk at a food exhibit We participated in FOODEX JAPAN, Japan’s largest food exhibit, where we also experienced business discussions to pitch Serbian food products to Japanese companies. At first, course leader Mr. Hirano made appointments for interviews with Japanese importers. Later, Mr. Hirano and the seminar participants visited the clients’ booths, with pamphlets in hand, and explained the Serbian products. On the following day, the participants plunged themselves into sales efforts with customers whom they targeted from among the FOODEX exhibitors, making future arrangements. 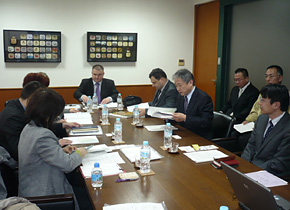 At a printing and design company, the participants hear about the importance of the design and quality of product packaging. They learned that in addition for the food products having fantastic quality, they also need to have eye-catching packaging and design if they are to sell in Japan.

One more thing learned was that before any berries or wine could be marketed, selling Serbia the country would extremely important. This offers a big chance in the future, as in the minds of the Japanese the image of Serbia a blank. If Japanese consumers have a positive image of Serbia, then that would also be expected to lend a good image to its products as well. For instance, the participants visited the Bulgarian Embassy, and its commercial counselor told them about the difficulties when Bulgaria first started exporting to Japan. Bulgaria established its image of yogurt after devoting a lot of time on it. Well-known figures, such as the Bulgarian-born sumo wrestler Koto-oushu, cooperated to bring Bulgaria closer to Japanese people. On this point, Serbia, said to be a new country, is late in the game. 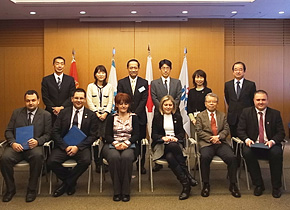 The participants pose at a closing ceremony when their seminar finished after a three-week period. At a session the previous day to present their action plans, their objectives were broken down according to their executable policies, and implementation schedules were also clarified. Everyone received high evaluations from their course leader.

Everyone received high evaluations from Mr. Yumiba for their action plans announced on the final day. The action plans after the participants return home, as well as their time charts, were highly detailed and undoubtedly serve as a springboard for the export of Serbian food products to Japan. So I end this message by saying I sincerely hope that fresh and really delicious raspberries and the fruity and refined tasting wine will become easily available in Japan.