PREX held the Training Program of Establishment of Urban Development System (Water and Sewerage) for Senior Administrative Officers in Vietnam during February and March for 43 people, comprising senior officials of Vietnam’s central and local governments. Although the penetration rate of water and sewerage systems in Vietnam is approximately 76 percent in urban areas, the leakage rate is extremely high, at around 30 percent. At the same time, the portion of sewerage handled at treatment 1facilities is under 10 percent in targeted areas. So for the participants from Vietnam, the chance to learn about the situation in Japan, where water and sewerage systems have been developing, is believed to have been an important source of information for them in the establishment of their own projects. 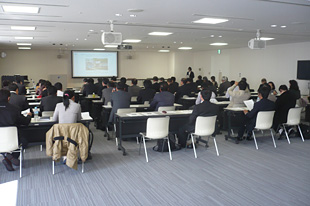 Vietnamese participants report on the water and sewerage situation. We enlisted the participation of a large number of Japanese people to the workshops, where they took part in exchanges of opinions. (A total of 51 people attended the two seminars.)

Background of the seminar’s implementation

This seminar got under way after Kankeiren sent a mission to Vietnam in November last year and received a request from the country’s Ministry of Planning and Investment to conduct research on water and sewerage. Then Kankeiren coordinated with JICA, and it was decided to implement the project promptly as a JICA seminar. PREX received notification from JICA and enlisted the cooperation of local governments, including the cities of Osaka and Kobe, experts in water and sewerage, pollution and urban planning, and companies involved in water-related technologies. The proposal was to introduce Kansai’s wide-ranging experiences to the present, and it was adopted and implemented. The participants, who had been put forward by Vietnam, made up an extremely large group of 44 people. As gaining positive results was expected to be difficult if only one seminar were implemented, it was decided to split it into two seminars, both having the same content. 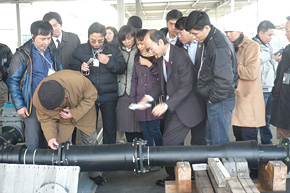 With great interest, the participants inspect a cast-iron joint from a pipe with properties that allow it to expand and contract and which is used by Osaka City’s Waterworks Bureau to repair leaks. 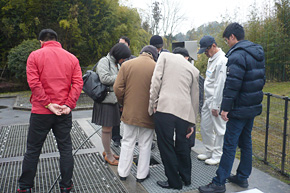 The participants inspect a sewerage project at a farming village in the Osawa district and enthusiastically ask questions about it. 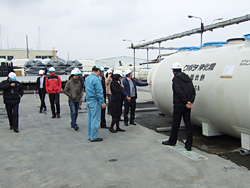 During a field trip, the participants study a large-scale comprehensive septic tank installed inside the Shiga Factory of Kubota Corp.