Just because seminars end, that doesn’t mean everything is over. PREX places importance on creating human networks that spring from its seminars. Follow-up activities for members composed of PREX seminar participants (from 14 countries and territories) are held several times a year in a variety of countries. For this fiscal year, activities were implemented from April 14 to 18 in Ho Chi Minh City and Hanoi, Vietnam.

Exchanges with seminar participants who returned home after the 33rd Session of the Kankeiren ASEAN Management Seminar Fiscal 2012. Seminar participants who returned home after attending the fiscal 2012 Kankeiren ASEAN Management Seminar (33rd session) held an alumni meeting on April 17 in Hanoi, Vietnam. It was a grand event, attended by 10 of the 18 corporate managers and executives (from Singapore, Malaysia, Myanmar, Thailand, Vietnam and Mongolia) who attended that year’s seminar, plus their family members as well as a seminar participant (from Laos) from the fiscal 2013 seminar, people with connections with Vietnam and people from the sites in Japan of the seminars’ trips. PREX is commissioned by the Kansai Economic Federation to implement this seminar. Two PREX employees participated in the latest alumni event. A seminar participant told us, “The seminar had a lot of significance for being a springboard for creating a forum for exchanges that transcends national borders. I would like to express my gratitude to Kankeiren and PREX. 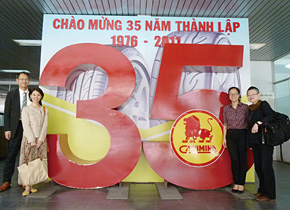 A visit to a prominent Vietnamese rubber-manufacturing company, which employs a former seminar participant. The company has marked its 35th anniversary. 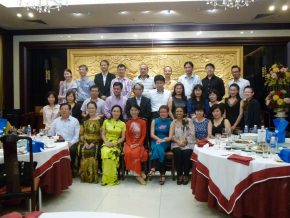 A lively alumni session was held, with nearly 30 people from eight countries including Japan in attendance.